My staycation continues with yet another kayaking trip. This time was an out-and-back. Not my favorite thing to do, but it’s nice not to have to pack the bike and shuttle between the start and finish. I also crossed the mouth of the Little Choptank so if I had done a one way, I would have had to bike 23 miles (feasible, but not enjoyable for me).

The nice thing about doing an out-and-back is that it saves time which was perfect today because I was able to get some paddling in, and still make it to a meeting I wanted to go to (Mothers of Preschoolers – woot woot!), although I was still late getting there. 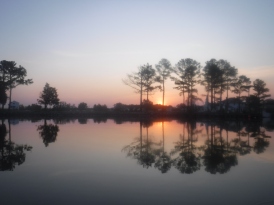 I got to the launch just in time for sunrise. There was not a soul in sight, which I was not expecting. Not event a truck and trailer parked in the lot. Usually there’s a waterman working on his boat, someone working in a fish house, or at least evidence that someone had already launched their boat for the day. Nothing here, which was even more surprising because this ramp is not far from civilization. Many of the ramps I go to are practically at the end of the earth, but there are still people there.

Although the wind was only around 5 knots, it was coming out of the WNW so as soon as I got up north of the marshy area and away from the launch, I was surprised by the size of the swells coming in from the bay. Not huge, but bigger than I would have expected for 5 kts. I actually didn’t need to use my GPS at all to navigate on this trip. Maybe I’m getting better at identifying what I saw on the map before I left? Or maybe this was just a super easy, straight shot over to Ragged Point.

I was also expecting a decent amount of boat traffic, given that I was in what I thought was watermen country. But not once did I have to worry about boat traffic. The paddle was actually quite relaxing and quiet! I zipped across the mouth of the Little Choptank and paddled until I hit land near Ragged Point. There is a boat launch further north of where I hit land, but whenever I end up launching from that ramp in the future, I will be headed south and will intersect the path I made today, so no sense in going all the way to the ramp (plus I had a meeting to get to, so no time to be wasted!). 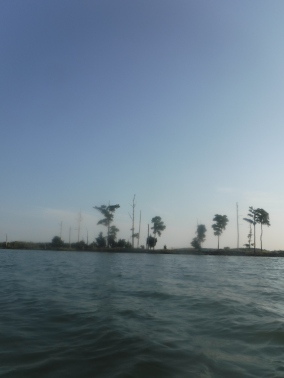 can you spot the eagle?

I saw quite a few bald eagles flying and fishing, and one perched in a tree. I also saw TONS of GIANT sea nettles! So glad I wasn’t swimming. These things were seriously monstrous! I wasn’t able to get a photo though. By the time I saw one, I was right on top of it and didn’t have time to get by camera out (and didn’t feel like turning around to look at a dang nettle).

Another weird thing I saw was this striped bass. I spotted it from yards away. First I thought it was a water snake, but as I got closer, I thought maybe a muskrat, maybe a turtle, definitely a ray, no definitely a shark… nope. A fish. Chillin’ on the surface. He was totally alive, but I imagine not doing well. What fish just hangs out with its fins out of the water? (sorry, don’t know why I can’t get a clear photo. Of like, anything!) 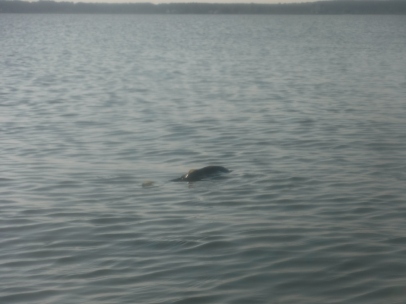 I hustled back to the ramp and made good time – 3.79 mph (that might be a record for me, although I haven’t really kept track)! With all of these back-to-back paddling trips I’ve been doing on my staycation, I’ve become super efficient and packing up all my crap and loading my kayak on top of the car. From paddling to driving was less than 10 minutes! And I made it for the last 45 minutes of the MOPS meeting 🙂

Here’s the path I took – 3.8 miles. I only tracked one way, but if you really wanted to see the full out-and-back paddle, just draw a line on top of the one you see here: