It is becoming a bit of a tradition now, that the Sunday of Memorial Day weekend is a time for us to flee the beach crowds and go kayak camping. This time we headed to the Eastern Shore National Wildlife Refuge to launch, and paddled out to Mockhorn Island to camp. Mockhorn Island is open to the public for camping so we were actually legally camping this time!  In the morning, I continued up north to the town of Oyster, VA and Brian went back to the car and picked me up on the way back.

The first stretch of this trip was through a pretty busy channel.  Brian drifted with the tide to flounder fish and I went ahead and explored a small island called Skidmore Island. Once I saw Brian catching up, I continued north towards Mockhorn Island.  As soon as I got to Mockhorn, I saw other people camping and my first thought was “crap, guess we don’t have the place to ourselves”, but we continued northward and it soon felt like we were the only ones out there.

We took a short break near an old abandoned homestead on the island. Brian has done some trapping out here for work in the past, so he had explored the area several years ago – it was almost like having a little tour guide. The homestead was quite expansive – house, barn, courtyard, gazebo, various outbuildings, and a concrete wall and mote surrounding the whole establishment. I couldn’t get over the amount of concrete! Everywhere you turned there was a building, a wall, a floor, all made of concrete. After doing a little research, it turns out most of the homestead was built by Larimer and Caroline Cushman in the 1920s and has been abandoned for several decades. The Cushman/Mockhorn story can be found here: http://www.abandonedcountry.com/2013/09/30/mockhorn-island-and-the-ruins-of-a-concrete-effort/.

something to feed the livestock?

the barn from acorss the mote

On our way back to our kayaks, we found a turtle skull – anyone know what kind? Clearly a sea turtle of some kind!

After exploring the Cushman homestead, we continued further north in search of a good camping spot. The wind was coming directly out of the south which pushed us most of the way. One thing that I saw a TON of on this trip were nets.  I guess they were pound nets of some kind? Not totally sure, but there were big chunks of net floating around the bay, and seeing that much discarded net was irritating to me. Clean up after yourselves, fishermen! 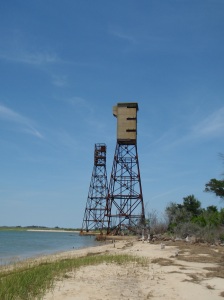 We finally chose a campsite on the west side of the island near two WWII towers. When I hear about WWII towers, I picture the circular concrete things we have in Delaware, but these looked more like giant deer stands! As I walked up the beach from our camp to get a closer look, I kept getting distracted by the number of terrapins nesting! It seemed like every couple hundred feet there was another turtle laying eggs! Some of them seemed unphased by my presence, while others stopped what they were doing when they saw me and ran back into the water. I also saw tons of raccoon tracks so I doubt many of those turtle nests will survive 😦 Oh well, the raccoons gotta eat too.

When I got back from my walk to the towers, we collected firewood, started a fire, and cooked our “boy scout dinners”; chicken and vegetables that we prepared and packed up in foil that morning. Pretty delicious, actually!

Brian then went for a walk and returned with an armload of clams. He proceeded to cook them over the fire and enjoyed a nice after-dinner snack (not me though, I stay way from all mollusks)!

our home for the night

The wind on Monday was predicted to pick up quite a bit by afternoon so we were early to bed, early to rise. However, I rose a bit earlier than I wanted to – 4 damned geese decided to float passed our campsite at the literal crack of dawn, and they would not shut up! I have no idea how Brian slept through their constant honking conversations. On the bright side, I was able to watch the sunrise over the marsh.

relaxing by the fire

waterman on the bay

Shortly after sunrise we packed up camp, ate a breakfast of bananas and granola bars, and went our separate ways. My plan was to skirt the edge of Mockhorn for most of the trip up to Oyster, but the tide was really low and I had to head further west, away from the island. As I started heading out into the bay, I came across a waterman – the first sign of people since I passed the people camping on the south end of Mockhorn the day before. I believe this waterman had just dropped a bunch of crab pots which was a huge help to me later on in this trip (I’ll explain why in a minute).

I kept checking the map on my phone to make sure I was headed in the direction of what I THOUGHT was a channel heading northwest towards Oyster. I seemed to be headed in the right direction, but as I approached the west side of the bay, there appeared to be a lack of navigable water. Everything in front of me appeared to me a giant mud flat. Damnit. I was barely in 6 inches of water and it looked like it was only going to get shallower! What the heck! Googlemaps, you have deceived me! I then altered my course to go back in a northeast direction. Maybe if I stayed in the middle of the bay (as opposed to the edges) that I would stay in navigable water. To make matters worse, I could not see a channel marker in sight. I kept chugging along, my paddle hitting the mud with every stroke, crossing my fingers that it wouldn’t get so shallow that I would have to get out and drag my kayak through the muck.

Then… BAM! SPLASH! I screamed (no seriously, I really screamed). Holy shit, OMG, WTF was that? Something. Some THING just smacked the stern of my boat and violently splashed around. Scared the crap out of me. Lucky I didn’t pee my pants. My instinct was to paddle faster and get away, so I did. But what was it? Still don’t know, but I’m pretty sure I startled a cow nose ray with my paddle and it freaked out. And freaked ME out in doing so. And now I REALLY didn’t want to have to get out of my kayak to drag it through the mud – heaven help me if I STEP on a ray.

Once I regained my composure after my near-death experience (okay, not really even close), I continued to paddle northeast, in hopes I would stay in navigable water. Still no channel markers. But then I got to thinking – I saw that waterman earlier, coming from the general direction I was headed. There HAD to be navigable water if a darn boat could get through at low tide! And that’s when it clicked. Follow the crab pot buoys. Clearly the boat had just dropped them (or checked/emptied them), so the water by the crab pots must be deep enough. And sure enough, I started to follow the yellow-brick road (and yes, some of the buoys were yellow), and it led me almost to the town of Oyster.

Once I entered an area known as “The Narrows”, navigating was really easy, the wind and tide pulled me quite a ways, and it became a very relaxing paddle. I saw black-bellied plovers, oystercatchers, loads of terrapins, and a WHITE PELICAN! Not sure what a white pelican was doing around here, but I was able to get a photo (not a very clear one, but you can almost tell what it is).

As soon as I got out of The Narrows, I started to see lots of boat traffic coming out of Oyster. Unfortunately, I had to follow the main channel all the way to the boat ramp because the tide was still way out and there were mud flats and exposed oyster beds blocking me from taking any other route. Along the last stretch of this paddle I passed the old Cobb Island Coast Guard Station – it has been relocated from Cobb Island to the mainland, so that it wouldn’t deteriorate or be completely destroyed by a coastal storm.

The town of Oyster was a neat place. It was just one of those classic waterman’s towns with a bunch of work boats and just a few houses. Not 10 minutes after I pulled my kayak out of the water, Brian showed up. Perfect timing!