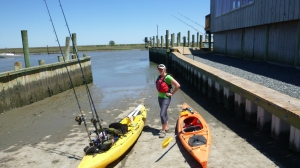 It was Memorial Day weekend and we decided we wanted to get away from the crowds.  Brian and I headed to Wachapreague, VA on Sunday with way more gear than we normally bring for a kayaking trip because this was our first attempt and camping by kayak!

Our goal was to reach Cedar Island before low tide so that we weren’t paddling against the incoming tide.  We reached Cedar in just under 2 hours.  There were a good number of daytrippers on Cedar so we went a little further and explored Dawson Shoals and the north tip of Parramore Island.

Brian had been out this way for work back in March and he was amazed at the geographic changes that had occurred to the islands   in just 2 months.  The southern end of Cedar Island had eroded away and Dawson Shoals had increased in size.  Although I didn’t know what it had looked like before, I am still always intrigued and amazed at the dynamics of barrier islands.  You’ll see in the map that it appears we kayaked straight across land, but that is now water (gives you some idea of the change).

I stopped tracking our path at this point so I could power off my phone to save battery.

We spent maybe 2-3 hours on Parramore; Brian fished and I explored.  We are technically not supposed to be on Parramore Island (it’s regulated by the Nature Conservancy, but Brian sometimes has work out there so I felt entitled) so after the tide started to come in, we headed back to Cedar Island to set up camp. 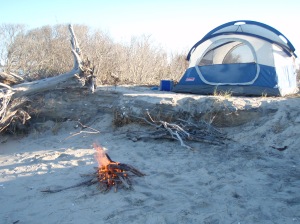 It took a little strategizing to find the perfect spot.  If we camped right on the beach, we were afraid the tide was going to come in too far.  If we camped too far inland, the bugs were TERRIBLE.  We walked up the beach a little ways, but we didn’t want to go too far north or the people staying at one of the houses (there are 3, I think 2 of them are abandoned) could see us and we weren’t totally sure we were allowed to camp there.  So we sucked it up, put on some bug spray and set up camp above high tide and slightly in the bushes.  However, once we started a fire, the bugs weren’t so bad and it ended up being quite pleasant.

I’ve only camped on a beach once and it was terrible – so windy that our tent stakes were pulled out of the ground and our tent started to blow away.  This was WAY better.  There was no wind and the temperature was perfect.  We couldn’t have asked for better weather.  And the STARS WERE AMAZING!  There were so many stars visible that I couldn’t identify constellations (something I’m pretty good at) because there were so many extra stars from what I’m used to seeing back home.

Leaving Parramore and headed to Cedar

We only caught sting rays… 😦

Next blog post will pick up the next morning!

One thought on “Wachapreague to Cedar Island”